In Collaboration With: Andrew Tseng 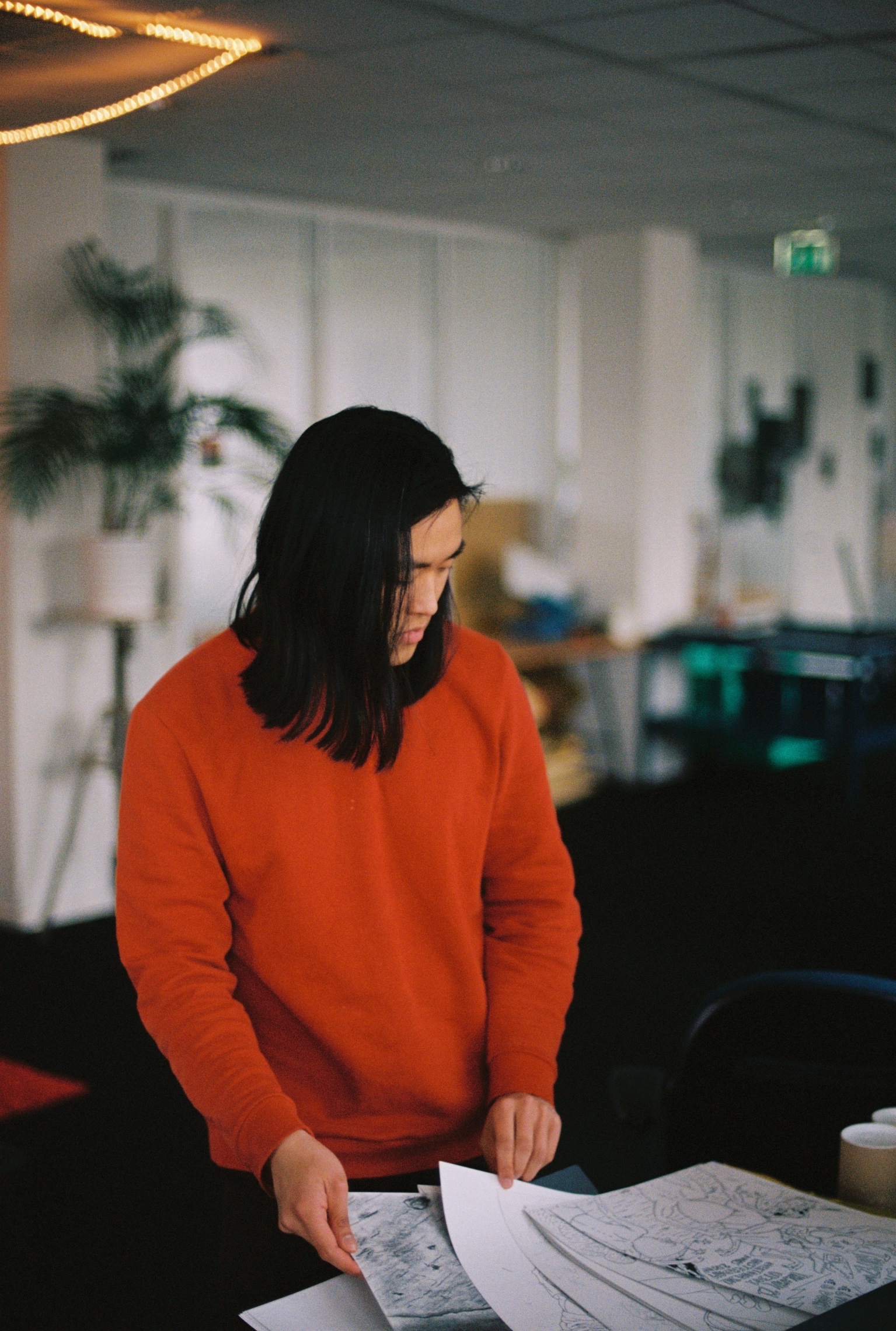 Andrew Tseng is an illustration graduate from the Utrecht University of Arts (HKU) and is currently based in Amsterdam. His artwork can be recognised by the often extreme yet humorous interpretations of everyday scenarios found in modern society. This was especially apparent throughout the multi-disciplinary body of work Andrew created for his graduation project titled ‘DOGMA’, which is about the absurdity of searching for meaning in life, but instead finding oneself indoctrinated into a cult.

Following the collaboration we did with Andrew, we got the chance to visit him at his studio in order to share his story with you, and get his take on the experience of working together.

To start off, take us on a little journey of becoming the artist you are today. What was your relationship with art as a kid, as a psychology student, and now, as a full-time artist?

I’ve always enjoyed drawing so that is where it all started. As a kid, I used to watch a lot of cartoons and movies so I was always drawing my favourite characters and that eventually developed into creating my own characters and stories. I grew up without siblings so drawing was also a way for me to keep myself busy.

After graduating from high school, I initially chose not to pursue an art degree but study psychology instead. I really wanted to go to art school but thought I lacked the talent. Since I had decided that I was not going to pursue a career in art I had lost interest and for a few years stopped drawing altogether.

Eventually, I really missed being creative and realized that if I wanted to pursue a career in art it was now or never. After completing my studies, I focussed all my energy on developing a portfolio and applying for art school. It wasn’t easy, as I hadn’t done anything art related during my entire psychology course, but I managed to get accepted in Utrecht.

During my time in art school, I got into illustrating concert posters for my friend who is a booker. That’s how I really started to develop my style as I felt I had the freedom to do whatever I wanted.

Now that I have graduated, I try to incorporate that lack of restraint in all of my projects.

Your creative process seems to be very story driven. How do you make your art? Does it always start with a story?

Mostly I’ll have some kind of an idea of what I want to make or some kind of association I can work from. If I don’t have an idea, I will try to keep it simple. To me, a story can be as simple as depicting someone doing something very mundane and have characters reacting to it. I usually take it from there and up the ‘silliness’.

The main inspiration for the Magic Mountain collection was the benefits of being in touch with nature. Talk us through your interpretation of the novel, and how is it reflected in the pieces you made for collaboration?

I wanted my illustrations to contrast the harsh mountain setting in which the story takes place with the adventurous spirit and romantic view of nature that was typical of the times.

Judging from your previous work, you seem to like the world of music. What’s your relationship with the music industry?

In high school, I really started to get into music and eventually started to play guitar in rock ‘n’ roll bands. So that has been an important part of my life growing up. Combining illustration with my love for music made a lot of sense. I started out doing concert posters for my friend who is a booker. These were usually for underground-type shows. After a while, I got asked to design posters for venues like Paradiso and Ekko and most recently for ADE Live, an event by Melkweg and Paradiso during Amsterdam Dance Event.

As of yet, I haven’t had the opportunity to design album artwork so that is high on my ‘want to do’ list.

Do you draw a lot of inspiration from music for your work?

I draw inspiration from music but it is more so in the feeling than in the lyrical content. It can help me visualize things. If I need to make something about a certain subject, I’ll sometimes put on music that I feel is somehow related or matches a vibe I have in my head.

Showing movement is very important in my work. Since music is innately tied to movement it can help me visualize a composition.

And your 3 favourite cover art illustrations?

It’s difficult to name specific covers since album artwork is so tied to the music. I do have a favourite artist who designs a lot of great album artwork. Robert Beatty is a great designer and I like almost everything he does. He has done work for so many different artists ranging from one of my favourite bands, The Oh Sees, to Ariel Pink to Kesha.

Now that you’re well into it as an Illustrator, would you say that it’s exactly what you thought it was? Or were there some unexpected things you encountered on your journey as an artist?

When I started studying illustration my understanding of it was a lot simpler. I thought being an illustrator meant mostly working on commission and always having to work within certain guidelines, whereas being an artist meant having a lot of freedom but also having to always come up with your own projects. The latter felt really uncertain to me and a bit intimidating so I thought I’d rather be an illustrator.

While I can enjoy working within the confines of a brief, I nowadays love to be afforded free reign over a project. I feel that this way projects turn out truer to myself and I tend to be most proud of these projects.

Besides illustration, what are some other mediums of expressions you prefer?

I’ve really enjoyed working with ceramics lately. I started playing around with it during my graduation project. When I make something, it is usually designed for a flat medium. With my style, I like to incorporate a lot of depth and movement, but also impossible perspectives. When translating these designs to three-dimensional works it takes a bit of figuring out but the results have been very rewarding. Having my work take up physical space and also retaining my style is very cool.

How does being from Amsterdam impact you as an artist?

Compared to other cities in the Netherlands, I feel there is just so much more to do. I usually get inspired when I’m not working, so in a city where things are constantly happening, there are a lot of things to draw inspiration from.

What are your three favourite places that you get inspired by in this city?

What was it like to collab with a fashion brand?

Collaborating with Irina was a really cool experience. It’s always a lot of fun to see your work incorporated into a different medium than you are used to. Working with a fashion designer is also something I’ve been wanting to do for a long time, so when I was approached for the project, I jumped at the opportunity.

What was your favourite part of the collaboration?

My favourite part was the actual collaborative aspect of the project. While we both have our own expertise, I feel like there was a lot of cross-pollination going on in regards to ideas and designing.

What was the most challenging aspect of the collaboration?

The most challenging aspect was figuring out what illustrations work on clothing. When a design is incorporated into clothing, there are many other factors that you need to take into account that might not matter when it’s just a piece by itself, since the clothing is also a piece by itself.

What is some advice/tips you can give to people who want to get into illustration?

It might be a boring answer but stick with it and draw a lot to get better. Also trust in your instincts and stay true to yourself. I think it is important to develop a personal style.